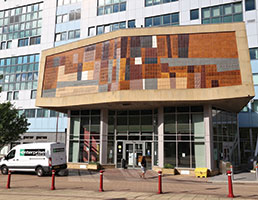 The University of Bradford has been named overall winner at the Chartered Institution of Building Services Engineers (CIBSE) Building Performance Awards 2017.

The university's department of estates and facilities came out on top with its Ecoversity programme, which has enabled "transformational work" on its ageing estates infrastructure over the past decade - reducing its carbon footprint by 35 per cent, and becoming the only university in the world to maintain three 'BREEAM Outstanding' rated buildings in its portfolio.

It is the first time the winner of the facilities management category has won the overall award.

The University of Bradford entry also won the Facilities Management Team Award. It was commended for its approach in tackling inherent problems within its large stock of legacy buildings from the 1960s and 70s, including their poor thermal performance, asbestos and large expanses of single glazing. By overcoming practical and organisational challenges, the university has cut utility costs by 27 per cent in a market that has risen 90 per cent, and saved £8 million over 10 years.

The university also won the Carbon Champion / Client of the Year award in 2012.

The judges were also impressed with the university's long-term strategy, which involves engaging stakeholders from all areas of the campus and implementing an extremely robust Building Energy Management System that delivers high-quality in-use performance data. Other features of the strategy include LED lighting and controls installation; replacing transformers and pumps; engineering and control improvements to the district heating network; expanding the BEMS; and reviewing and optimising compressed air.

The new Test of Time category was claimed by previous champion British Land, which has demonstrated continued high performance since its 2012 win.

John Field, president of CIBSE, said: "We have seen the industry come a long way on building performance in the last 10 years, and this year's awards are a testament to how much has been achieved in a relatively short period of time, and the excellent work that is currently being done.

"This year's champions, the University of Bradford, embody what it means to truly strive for building performance, achieving success in the face of adversity through sheer will and commitment to deliver the best. All the winners and finalists this year are examples to look up to, and demonstrate what can be achieved with any size and budget if the right thinking is in place."