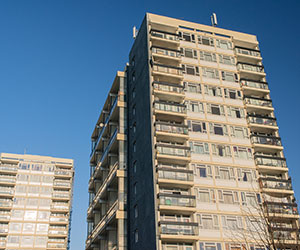 %>The Building Research Establishment (BRE) has completed the latest in the government's series of fire safety tests of cladding and insulation combinations.

The Department for Communities and Local Government said the large-scale tests would allow experts to better understand how different types of cladding panels behave with different types of insulation in a fire. The results of the first five tests have already been published.

This additional test was of a wall-cladding system consisting of aluminium composite material (ACM) cladding with a fire-retardant polyethylene filler (category 2 in screening tests) with phenolic foam insulation.

The government's expert panel says the results show that the combination of materials used in the test does not meet current Building Regulations guidance.

Initial screening tests have identified 22 buildings over 18 metres tall in England known to have a combination of ACM with a fire-retardant polyethylene filler with phenolic foam insulation.

Cladding samples from each of these buildings had already failed earlier combustibility tests conducted by BRE and their owners were sent government advice detailing the immediate interim safety measures that had to be completed. Appropriate measures have been put in place for all 22 of these buildings.

The series of large-scale tests initially included six combinations of cladding systems. Earlier this month, the government announced that on the advice of the expert panel it would undertake a further large-scale test of ACM with fire retardant polyethylene filler (category 2 in screening tests) with phenolic foam insulation.

The department said that results of the final large-scale test (ACM with a limited combustibility filler with mineral wool insulation) and advice to landlords based on all the seven tests would be published shortly.