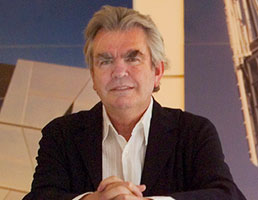 One of the country's leading architects expects the design of buildings to be increasingly influenced by facilities managers in the coming years.

Sir Terry Farrell CBE was speaking to FM World at a ceremony where he received the Royal Town Planning Institute's Gold Medal. The award was given in recognition of his achievements as "one of the world's most influential architects, planners and urban designers".

Citing the growing influence of building information modelling and collaborative information technology in general, Sir Terry commented that FMs "will start taking over the (running of) buildings, or taking a lead role.

"They (facilities managers) will become the depository of information about how buildings work. And they'll be the first ones in the next few years that people turn to, to say 'can you write the brief, and can you supervise the architect?"

Sir Terry expects that the increasingly ubiquitous role of collaborative IT will empower some of the people that have been knocking on the door to influence architects, but haven't had the power to do so until now. But communication between the two professions will be key.

"Just as architects don't give free rein to facilities management, FMs and architects have got to get together; they've got to understand each other."

Sir Terry Farrell is responsible for the design of many iconic buildings in the UK and internationally. He has contributed to key strategic issues and policy-making at a national level, most recently spearheading the recent Farrell Review of Architecture and the Built Environment.

He has also been responsible for a number of regeneration projects throughout the UK, including Newcastle Quayside, Brindleyplace in Birmingham, Edinburgh Exchange district, Greenwich Peninsula and Paddington Basin. Current work includes Earls Court, Royal Albert Dock, and proposals for low-cost lifting bridges in East London.