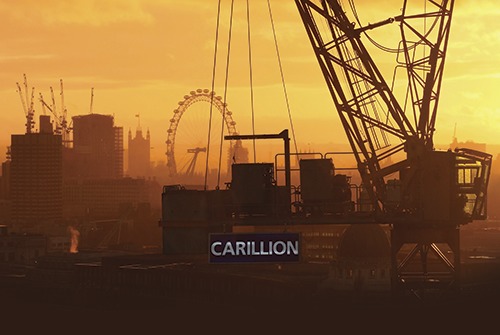 We take a deeper look into Carillion's demise and hear from experts in the industry.

Months before Carillion collapsed, a series of worrying developments were already indicating that the UK contractor was in trouble.

There had been profit warnings, the selling of contracts to competitors, the appointment of a new chief executive and the Financial Conduct Authority had opened an investigation into the "timeliness and content" of financial announcements.

But news of the liquidation was still a jolt for the industry.

Tony Raikes, managing director at Vinci Facilities, says the situation was "shocking in how they have gone immediately into liquidation" and how it was "unprecedented that a company of Carillion's size got into the position they got themselves into".

The company's debts are reported to amount to more than £1.5 billion, with a pensions deficit of more

than half a billion.

Rebecca Long-Bailey, Shadow Secretary of State for Business, Energy and Industrial Strategy, criticised the government's awarding of contracts despite Carillion's three profit warnings over the past six months.

"It is essential that shareholders and creditors are not allowed to walk away with the most profitable contracts while the taxpayer bails out loss-making parts of the business," said Long-Bailey.

Within hours of the announcement of the collapse, business secretary Greg Clark had asked the Insolvency Service to fast-track an investigation into Carillion's directors and broaden scope to include those directors previously employed by the firm.

Immediately afterwards, Carillion chairman Philip Green said the government "will be providing the necessary funding required by the official receiver to maintain the public services carried on by Carillion staff, subcontractors and suppliers".

The government has also been meeting with business and construction trade bodies, representing sub-contractors.

Within 48 hours of the collapse the Insolvency Service said all of the company's private sector service customers had been contacted "to determine their ongoing needs". The fate of these contracts is being decided over the coming weeks and months.

At the James Cook University hospital in Middlesbrough, Carillion was responsible for 900 staff working on site delivering a range of hard and soft FM services including switchboard, cleaning, portering, laundry and security.

A spokeswoman for South Tees Hospitals NHS Foundation Trust told FM World: "As part of our private finance initiative PFI agreement, Endeavour - the special purpose vehicle responsible for the overall operation and maintenance of the James Cook University Hospital site - stepped in to ensure all key services continued to be provided and run safely for our patients and staff. Carillion workers at the hospital are now being managed by PwC on behalf of the official receiver."

She added: "It is assumed all current Carillion staff at James Cook will transfer into the new service provider, once appointed."

The Nationwide Building Society is moving more than 2,000 employees in-house after its £350 million facilities management contract with Carillion ended.

A Nationwide spokeswoman confirmed that the bank would be bringing all services provided by Carillion in-house including cleaning, maintenance and waste management. About 250 Carillion employees will now be employed directly by Nationwide. Another 1,500 staff are engaged by separate third-party suppliers who work on Nationwide contracts with Carillion. These suppliers will also have their contracts directly with Nationwide.

Oxfordshire County Council was due to terminate its contract with Carillion LGS Ltd on 1 February. It brought forward the already agreed end of the deal set for the end of June. The council made a net payment of £10.65 million to Carillion to cover work already completed as part of the final settlement to end the contract.

Carillion had provided services including school meals and cleaning, maintenance of council buildings, property services, and building work such as school extensions on behalf of the county council. The council struck the exit deal early and paid it off in December, weeks before Carillion's parent company went into liquidation on Monday 15 January.

Councillor Lorraine Lindsay-Gale, cabinet member for property, cultural & community services, said: "We will be taking over those services to ensure continuity. Carillion's financial problems were not the original reason we wanted to end the contract. But as the scale of the company's problems became apparent we are very glad we ended the contract when we did.

"This early exit deal means we can get on with finding better ways to deliver services that Carillion provided," she added.

Carillion staff in maintained schools that contracted their services via Oxfordshire County Council will be transferred to the council under TUPE rules, and services will continue as normal. The 10-year contract was signed in 2012. Services previously provided by Carillion to the council will continue through a mix of bringing staff in-house (e.g. school meals, cleaning), continuing with suppliers (mainly catering), and working with existing sub-contractors (mainly construction and property services).

The council will have paid about £148 million to Carillion since 2012. Like every other Carillion customer, it is now working out the most cost-effective way to complete unfinished work. The council will take over direct responsibility for commissioning construction work and services. Officers are talking to sub-contractors about the way forward.

Carillion sub-contractors and suppliers will be financially exposed to the collapse in Oxfordshire, as is happening across the country.

The council is establishing a process to assess, on a case-by-case basis, the impact on firms in the Carillion supply chain involved in providing council services such as building maintenance.

Lindsay-Gale said: "We recognise the significant impact on local companies working for Carillion that may be owed money and hope that work can continue as soon as possible. We are very grateful to Carillion staff and suppliers for helping us to deliver essential services in the short term and now want to work closely with contractors and suppliers on a longer-term basis."

In other quarters, losses are being counted. A snap poll of Carillion engineering sub-contractors shows that many companies are facing huge financial losses from the collapse.

Data obtained by the Building Engineering Services Association (BESA) and the electrotechnical and engineering services trade body ECA shows that Carillion owes about £75 million to about 80 engineering services firms that provide vital services such as electrical, plumbing, gas, fire and security, and heating and ventilation.

The overall losses are likely to be far higher, given that there are thousands of businesses operating in the industry. The engineering services sector is the largest part of the construction industry by value. The ECA and BESA survey shows that contractors of all sizes have been affected by Carillion's demise.

Last week, BESA and ECA met with liquidator PwC and the government. PwC said any private sector work undertaken by Carillion suppliers before 15 January this year would be unpaid. Instead, it would be treated as 'unsecured debt', and placed at the back of the queue behind other creditors.

BESA president Tim Hopkinson said: "We knew the fallout from this seismic episode would be extremely serious, but these figures give us a clearer picture of just how hard our sector is going to be hit in terms of the thousands of pounds of unsecured debt that will be lost by ordinary hard-working small businesses, jeopardising their future and the future of their staff."

ECA director of business Paul Reeve said: "These findings underline the need for concerted action from the government and banks to protect and support SMEs in the construction and services sector. The government should also introduce legal measures to ensure SMEs are not continually exposed to upstream insolvency."

Both ECA and BESA have long called for reform to unfair payment practices within construction. Carillion was widely known to take over four months to pay suppliers, despite 30-day payment being industry good practice. To tackle this slow payment, the two trade bodies are calling on the government to pay small and medium-sized businesses directly, using 'project bank accounts'.

BESA and ECA are also supporting a bill tabled by Peter Aldous MP, which is going through Parliament. The bill would prevent clients and main contractors, such as Carillion, from using their own accounts to store money held back from suppliers in case of defects - ring-fenced, independent accounts would be used instead.