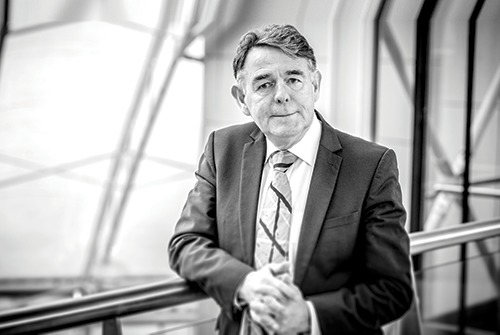 Clive Wilson, director of facilities and  services at the University of Bradford, spoke to FM World about his MBE appointment.

Clive Wilson, director of estates and facilities at the University of Bradford, was made an MBE in the Queen's New Year's Honours. Wilson - who was specifically recognised for services to higher education and sustainability -  told FM World that the honour had come as "an utter surprise".

"When you get a doctorate, you know you've worked towards it but I feel as if I've had no part in [receiving this] and it is very humbling and wonderful," he says.

Wilson's interest in sustainability began in the estates department at the University of Hong Kong.

"My last three years there were as a senior lecturer in environmental studies and facilities management," he says.

Wilson says he is passionate about sustainability "because I have grandchildren" and "we only have one planet, with finite resources and we must think of future generations".

While this was his motivation, he says, "when I talk to others I do so in 'pounds, shilling and pence' because it makes financial sense to".

Wilson's hard work has paid off. Last year the university won the Chartered Institution of Building Services Engineers (CIBSE) Building Performance Awards - the university's fourth win in this awards scheme and its second success in the top category.  Judges said the Ecoversity programme had enabled "transformational work" on an ageing estate's infrastructure over the decade. This has led to utilities costs cuts of 27 per cent, saving £8 million.

He says his main challenge was getting senior management on board, but says, "I've been dead lucky" in working with receptive vice-chancellors.

"I might have come up with the ideas, but I had a great team of people including vice-chancellors, financial directors, others within finance, and the team in estates that helped me."

In 2005 he launched 'Ecoversity' with the estates team - a programme that aimed to ensure "that everyone did things in a sustainable way".

Director of Estates and Facilities, University of Bradford

2004 to present - director of estates and facilities, University of Bradford