Carillion: picking up the pieces 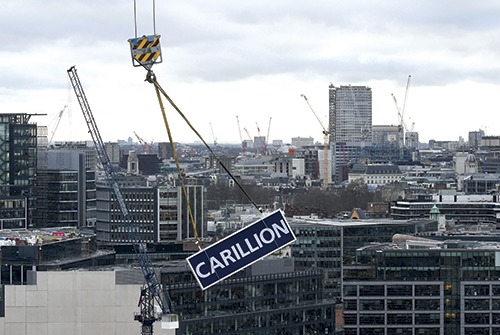 Carillion's demise has left contractors and workers with an uncertain future. Herpreet Kaur Grewal reports on the latest ongoings.

Over the past month, the promise of thousands of former Carillion jobs being salvaged was dashed when Canadian company Brookfield Global Integrated Solutions (BGIS) exited a deal to buy a large swathe of contracts from the collapsed support services and construction firm.

This left 2,500 FM jobs in limbo. BGIS, a global real estate and FM services provider, said that its previously announced agreement to acquire a portfolio of Carillion FM contracts in the UK would not be proceeding, "as certain closing conditions have not been met".

Gord Hicks, CEO of BGIS, said: "While we are disappointed at this outcome, we are continuing to pursue opportunities to grow our global business into the UK."

A statement from the government's Insolvency Service said: "The agreement with BGIS was conditional on ongoing support from customers for continued provision but this could not be secured. Transfers of other FM contracts following sale agreements are continuing."

A spokesman for the government's Insolvency Service told FM World that the jobs of the 2,500 FM staff affected by the new development "are safeguarded for now".

He added that the government could not guarantee that customers of the contracts would seek other suppliers to deliver FM services, as it continues looking for active purchasers.

In February, BGIS announced that it would acquire a portfolio of UK contracts for delivery of services in the hospital, education, justice, transport and emergency services markets subject to closing conditions.

In January 2016, BGIS had said it would acquire the remaining 50 per cent of the Canadian and Australian facilities management businesses from Johnson Controls Inc. Both companies previously held the businesses in a joint venture arrangement.

Separately, the official receiver announced that a further 305 employees who work on facilities management, defence and construction contracts have

But it added that "regrettably, we have been unable to find ongoing employment for a further 78 employees who will leave the business later this week. Jobcentre Plus' Rapid Response Service will provide them with every support to find new work".

Discussions with potential purchasers for Carillion's remaining contracts are continuing.

In total, to date 8,521 jobs have been saved and there have been 1,536 redundancies as part of the liquidation. Close to half (46 per cent) of the pre-liquidation workforce have now found secure continuing employment.

This information does not include contracts where an intention to purchase has been entered into but has not yet formally happened.

About 7,300 employees are currently retained to enable Carillion to deliver the remaining services it is providing for public and private sector customers until decisions are taken to transfer or cease these contracts.

The academy asked T(n)S to implement an emergency survival plan immediately after staff had been informed that Carillion might go into liquidation, affecting staff, suppliers and ultimately the meals services at four schools. The survival plan was designed following discussions between the academy and T(n)S Catering's sales director Karen Thompson, operations director Richard Drewett, and operations manager Paul Stephenson.