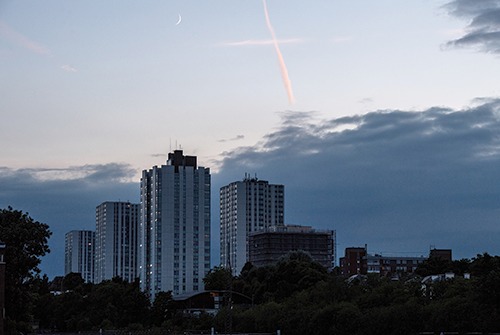 The Royal Institute of British Architects has raised concerns that the Hackitt Review will not deliver sufficient changes to building regulations and fire safety.

It has raised "serious concerns" over the direction of the independent review, led by Dame Judith Hackitt, which was set up after the Grenfell Tower fire tragedy.

18m - Buildings over this height should be made of non-combustible materials and retrofitted with sprinklers, says RIBA

In a letter to Sajid Javid, the Secretary of State for Housing, Communities and Local Government, RIBA's Expert Advisory Group on Fire Safety said it was concerned that key changes to ban flammable cladding, require sprinklers to be fitted and ensure there is a second means of escape for high-rise residential buildings, seem to have been overlooked.

In the briefing document it has made recommendations that it urges the government to consider before the final report is due next month.

Jane Duncan, immediate past president of RIBA and chair of RIBA's Expert Advisory Group on Fire Safety, said: "The RIBA has engaged closely with Dame Judith and her review and we welcome many of the suggestions made in her interim report to strengthen the building control system.

"However, we fear that the current set of proposals under consideration overlook simple but critical changes that would provide clarity for professionals and most importantly, would help protect the public.

"Sprinklers, a second means of escape and a ban on flammable cladding for high-rise residential buildings are commonsense recommendations, and a basic requirement in many other countries.

"We have written to the secretary of state making it clear that there must be a thorough rewriting of the building regulations and guidance on all aspects of fire safety, to avoid continuation of the regulatory failings that led to the Grenfell Tower fire."

Separately, the government has launched a consultation on proposals to limit or ban the use of 'desktop studies' to assess the fire resistance of cladding on residential buildings.

The consultation, launched by the Ministry of Housing, Communities and Local Government and housing secretary Sajid Javid, follows recommendations from Dame Judith Hackitt's interim report on a review of building regulations and fire, after the Grenfell Tower fire last year.

A Ministry for Housing, Communities and Local Government spokesman said: "Following the Grenfell Tower fire tragedy we asked Dame Judith Hackitt to undertake an independent review into building and fire safety regulations and report back to us. This work is ongoing and it would be inappropriate to prejudge and comment on the outcome of the report."

"We expect her final report to be published this spring."

1 External walls of buildings over 18m in height to be constructed of non-combustible (European class A1) materials only.

2 More than one means of vertical escape from new multiple-occupancy residential buildings over 11 metres high, consistent with current regulations for commercial buildings (which are arguably lower risk).

3 Retrofitting of sprinklers/automatic fire suppression systems to existing residential buildings above 18m from ground level in height as "consequential improvements" where an existing building is subject to 'material alterations'.

4 Sprinklers/automatic fire suppression systems in all new and converted residential buildings, as currently required under Regulations 37A and 37B of the Building Regulations for Wales.