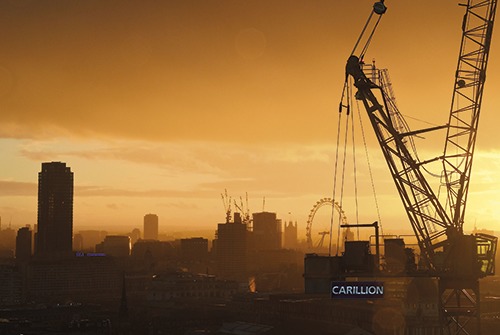 Carillion's business model was "an unsustainable dash for cash", says a report published by the Work and Pensions and Business, Energy and Industrial Strategy select committees.

It says Carillion's story was one of "recklessness, hubris and greed".

And the perception of Carillion as a healthy and successful company was "in no small part due to its directors' determination to increase the dividend paid each year, come what may".

It adds that in the company's final years, "directors rewarded themselves and other shareholders by choosing to pay out more in dividends than the company generated in cash, despite increased borrowing, low levels of investment and a growing pension deficit".

MPs criticise Carillion for using "aggressive accounting policies to present a rosy picture to the markets".

The report also slams Carillion's former chairman Philip Green, who it says "interpreted his role as to be an unquestioning optimist, an outlook he maintained in a delusional, upbeat assessment of the company's prospects only days before it began its public decline".

Richard Howson, Carillion's chief executive from 2012 until July 2017, it says, displayed a "misguided self-assurance [which] obscured an apparent lack of interest in, or understanding of, essential detail, or any recognition that Carillion was a business crying out for challenge and reform".

Keith Cochrane, who was an inside appointment as interim CEO, served as a non-executive on the board "that exhibited little challenge or insight".

The report concludes: "There are no easy solutions, but there are some bold ones."

These include calling on the government to review the responsibilities of its Crown Representatives in the light of the Carillion case. This should consider whether devoting more resources to liaison with strategic suppliers would offer better value for the taxpayer. It also recommended that the government should refer the statutory audit market to the Competition and Markets Authority.

That review should explicitly include consideration of both breaking up the 'Big Four' into more audit firms, and detaching audit arms from those offering other professional services.

The joint committees' full recommendations can be found here: tinyurl.com/FMW0618-mps

The Association of Independent Professionals and the Self-Employed (IPSE) commented on the report, claiming that self-employed suppliers and subcontractors were those most affected by the "recklessness, hubris and greed" at Carillion.

The body said Carillion was well known for its poor payment practices, extending its supplier payment period to 120 days despite signing up to the Government's Prompt Payment Code.

As the report notes, although it relied on its often self-employed suppliers, Carillion "treated them with contempt. Late payments, the routine quibbling of invoices, and extended delays across reporting periods were company policy".

IPSE is calling on the government to help stop this malpractice by expanding the powers of the Small Business Commissioner to include fining habitual late payers.

Self-employed suppliers will also lose significant income from the collapse of Carillion. The committee report reveals that the company "owed around £2 billion to its 30,000 suppliers, subcontractors and other short-term creditors". They will get little back from the liquidation.

IPSE is calling on the government to ensure that self-employed workers could not suffer from such a corporate catastrophe again.

Dave Jackson, chair of IPSE's Construction Advisory Committee, said: "If one good thing can come out of this review into Carillion, it needs to be better payment terms for those on public contracts. Waiting up to five months to be paid impacts on everyone in the supply chain and is felt directly in the pockets of the freelance builders. The government needs to take action now and deliver on shorter payment periods on their contracts."

Simon McVicker, IPSE's director of policy, said: "Carillion's treatment of self-employed and other suppliers was nothing less than a disgrace. The company's poor payment practices have even left many self-employed people out of pocket long after its collapse. At IPSE, we wholeheartedly back the report's calls for urgent action to stop this happening again."

Earlier in the month, the bosses of Mitie and Serco appeared in front of Parliament's Public Administration and Constitutional Affairs committee as it launched an inquiry into how the government and public sector manages the risks of outsourcing the delivery of public services.

Phil Bentley, Mitie CEO, talked of six key lessons learned from the collapse. His key recommendations were to improve public sector outsourcing to generate better value for the taxpayer and promote innovation and the use of technology across the outsourcing sector, to include a greater role for the Crown Commercial Service, a new code of conduct for the industry, and the need to consider value, not just cost, in public sector procurement.

For more information about the inquiry go here: tinyurl.com/FMW0618-lessons