sit-stand and standing desks do not significantly reduce sitting 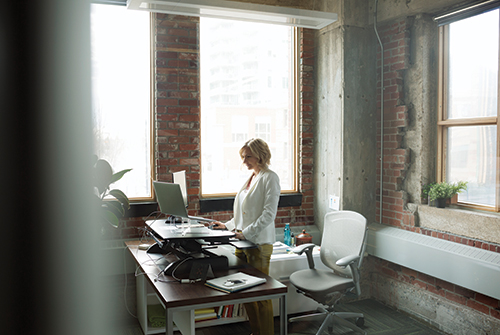 The idea of a sedentary lifestyle being more likely to cause sickness and even death is one that has been around in workplace research circles for a while.

A survey last year by Active Working, a community interest company, found that the vast majority of office-based workers are aware of the health dangers of spending hours on end seated at their desks, but management is failing to respond to their needs.

Growing scientific evidence indicates that sitting for more than four hours each day (however active a person you are outside the workplace) leads to multiple health risks (including cardiovascular disease, Type 2 diabetes, certain cancers and mental health problems).

One of the solutions presented to tackle the problem has been sit-stand desks. But how much do they really help?

The consultant reported that it "found no significant difference between the effects of standing desks and sit-stand desks on reducing sitting at work".

The use of sit-stand desks seems to reduce workplace sitting on average by 84 to 116 minutes a day.

When combined with the provision of information and counselling, the use of sit-stand desks seems to result in similar reductions in sitting at work.

Sit-stand desks also seem to reduce total sitting time (including sitting at work and outside work) and the duration of workplace sitting bouts that last 30 minutes or longer.

One study compared standing desks with sit-stand desks but owing to the small number of employees included, it does not provide enough evidence to determine which type of desk is more effective at reducing sitting time.

Total sitting time (including sitting at and outside work) also decreased with sit-stand desks compared with sit-desks, as did

the duration of sitting bouts lasting 30 minutes or more.

The authors also say: "Combining multiple interventions seems to be effective in reducing sitting time and time spent in prolonged sitting bouts in the short term and the medium term. However, this evidence comes from only a small number of studies and the effects were very different across the studies."

The report concludes that "the quality of evidence is low to very low for most interventions, mainly because of limitations in study protocols and small sample sizes".

At present there is low-quality evidence that sit-stand desks may reduce sitting at work in the first year of their use, concedes the report.

However, the effects are likely to reduce with time. There is generally insufficient evidence to draw conclusions about such effects for other types of interventions and for the effectiveness of reducing workplace sitting over periods longer than one year.

The authors add: "More research is needed to assess the effectiveness of different types of interventions for reducing sitting at workplaces, particularly over longer periods."

A separate report published in August found sit-stand desks are a cost-effective way for a business to improve the health of workers.

The study, 'Economic Evaluation of a Randomized Controlled Trial of an Intervention to Reduce Office Workers' Sitting Time: the 'Stand Up Victoria' Trial, published in the Scandinavian Journal of Work and Environment and Health, sought to examine the "economic credentials of a workplace-delivered intervention to reduce sitting time among" workers.

It found that providing standing desks had a net cost of about $344 per person but that this could be reduced by economies of scale with bulk order and sharing workstations.

The researchers performed a cost-efficacy analysis and long-term cost-effectiveness analysis (CEA) and recruited 231 desk-based workers, aged 24-65 years, across 14 worksites of one organisation.

A survey conducted last year by Active Working, a community interest company, found that more than three-quarters of respondents of 275 business organisations across the UK, wanted to see clear leadership, encouragement and better education on active working solutions, 38 per cent believed a complete culture change was necessary, and 32 per cent wanted access to adjustable desks.

Only 32 per cent of companies were said to be 'very aware' of the health risks of prolonged sitting, an encouraging

Almost 60 per cent of those questioned said co-workers spend six or more hours a day seated during a typical office day, with almost 90 per cent saying colleagues spend upwards of five hours a day sitting down.

This is despite more than 75 per cent of office workers who replied confirming that they were 'very aware' of the health risks of prolonged or excessive sitting.

Another 20 per cent said they were 'somewhat aware' of the dangers of the 'sitting disease', but wanted to know more. Fewer than 5 per cent were either unaware or simply not that bothered.

More than 2,500 businesses have signed up to On Your Feet Britain, encouraging millions of staff members to participate in a variety of fun and simple activities in their workplace to allow them to sit less and move more.