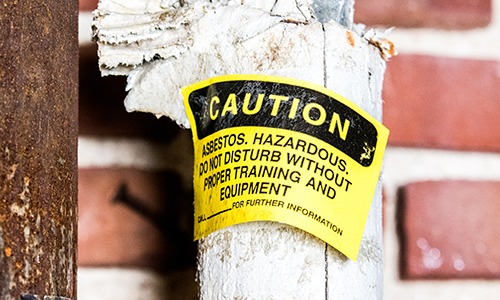 Tougher controls are needed on Asbestos materials in the workplace, a report has found.

A report calling for stricter controls on the presence of asbestos containing materials (ACMs) in the workplace says the focus should be particularly on schools and hospitals.

The paper, by risk management consultant Lucion Services, makes the case for amending and enhancing the current 'duty to manage' responsibility required by the Control of Asbestos Regulations (2012), and calls for the setting of an occupational exposure limit for buildings known to contain high-risk asbestos.

It also advocates the measurement of airborne asbestos fibre concentrations at the time of periodic reinspections using modern air sampling and analysis techniques.

The study highlights how the cumulative effects of chronic low-level exposure to asbestos that remains embedded in public buildings will have an impact long into the future, with the younger age of first exposure and increased life expectancy of children, making them particularly vulnerable to the deterioration of asbestos materials in schools.

Charles Pickles, chief technical officer at Lucion and author of the report, said: "There is now serious and growing concern over current exposure levels from asbestos that remains in situ because the materials themselves have either been damaged and or are degrading, increasing the likelihood of fibres being released into the air.

"Rather than inspecting building materials for damage, the measurement of airborne fibres would enable the risk to the health of occupants to be directly measured and cost-effective asbestos abatement to be carried out."

The UK was once the world's largest importer of asbestos - considered to be a 'wonder' material - and it was commonly used in building materials during the 1950s and 1960s for many purposes including insulation and soundproofing.

Once asbestos was found to be toxic its use was gradually limited as various forms of workplace and asbestos specific regulations progressively tightened asbestos controls, yet it still remains in many shops, houses, hospitals, offices and schools that are still in use today.

Other European countries such as the Netherlands and France have introduced far tighter asbestos controls and occupational exposure limits, despite not having

the historically high levels of asbestos use compared with the UK.

Schools and hospitals, among other workplaces, are of most concern. The possibility that teachers and pupils could be inhaling raised levels of asbestos for six or seven hours a day led the Department for Education in 1983 to consider a proposal for an 'environmental' limit to be created specifically for schools. However, an environmental level has never been introduced and workplace clearance limits are instead still applied to classrooms.

Pickles added: "UK health and safety law is based on the commensurate adoption of best practice as and when it becomes available. Regrettably, this has not been the case with asbestos analysis methods and the time has come for the introduction of more effective control limits to ensure that occupational exposure assessments are capable of proving that buildings are indeed safe for continued use."