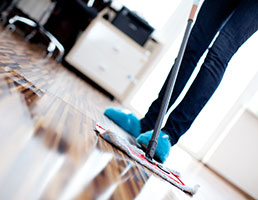 The UK contract cleaning market has accelerated between 2014 and 2016 in line with the economy after three years of marginal growth, according to new research.

Uncertainty caused by factors such as Brexit has meant that this market growth is "unlikely to be sustained over the next few years", states the report by market research and consultancy services firm, AMA Research.

Demand in the near future is likely to be "relatively buoyant in the transport sector, while the retail, commercial offices and the government sectors are likely to provide fewer opportunities, at least in the short term", according to the report.

There has been an underlying trend towards greater levels of outsourcing over the last decade which has driven demand for the contracting out of cleaning services, the report states.

Cleaning and hygiene services often form part of a total facilities management contract, typically comprising around 12-15 per cent of the contract value.

The report also points out that despite over 40,000 businesses operating in the cleaning industry, the market for contractors is dominated by a relatively small number of large IFS/IFM and multi service providers and large and medium sized specialist cleaning contractors.

There is also a significant franchise sector in the market, as cleaning remains one of the most popular franchise opportunities, offering a relatively low-cost investment, in a robust market with relatively few barriers to entry.

Moderate growth is expected to continue within the contract cleaning market with a mix of negative and positive factors impacting the market. The demand for bundled service and Total Facilities Management contracts will continue to be a strong driving force as public and private sectors look to maximise value from contracts.

However, there is concern that the Brexit decision may have an impact on the labour market and, with labour costs accounting for an estimated 80 per cent of any invoice within the contract cleaning market, changes such as an increase to the National Minimum Wage have a significant impact on the health of the sector.

Fiona Watts of AMA Research said: "Cleaning is one of the most competitive of all contracted-out sectors, and profit margins are under significant pressure due to rising labour costs and increasing raw material and equipment costs. In addition, there is pressure on the cleaning industry to improve standards, particularly in the healthcare sector, while also increasing efficiency."